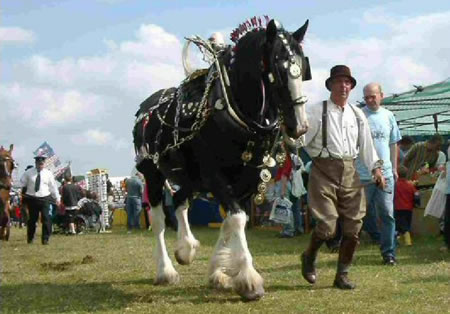 We will be having a selection of heavy horses and their turnouts at this years show.

Origin:  The Shire Horse is a native of England, but the Midland counties of Lincoln, Derby, Cambridge, Norfolk, Nottingham, Leicester and Huntington, collectively known as “The Shires”, were the special homes. History mentions the horse by different names: the Great Horse, the War Horse, the Cart Horse, the Old England Black Horse, the Lincolnshire Giant as well as the Shire.

Character:  The Shire is a good and faithful worker in agriculture and commerce, and has been said to be a synonym for strength, constitution, energy, and endurance. They are docile and kind, but have personality to spare and a strong desire to form a genuine partnership with the people who handle them. They are used for every discipline a horse can be used for, from logging to commercial carriage driving to dressage to trail riding.

Physical Characteristics:  Shires may be black, brown, bay or gray. Occasionally a sorrel will be seen. They usually have some white facial marking, typically a blaze, and white stockings, often on all 4 legs and reaching up to or over the knees and hocks. The legs will always bear the famous “feather”, long thick hairs springing from the legs below the knees and hocks that will in most cases cover the entire hoof down to the ground.

Height - Shires range from 16.2 hands upward, average height being 17.2, but many individuals reaching 18 to 19 hands and taller.

Origin:  The Percheron horse originated in the province of Le Perche, near Normandy in France. The “true” Percheron horse was developed in the 17th and 18th centuries, but there is evidence that the breed existed during the ice age. In the 19th century, the French government established an official stud at Le Pin for the development of army mounts and for the encouragement of the breeding industry.

Character - The Percheron horse of today has a very pleasing disposition. They are proud, alert, intelligent, and a very willing worker.
Physical Characteristics:
Colour - Percherons are usually black or grey, but sorrels, bays and roans do exist. White markings sometimes appear on the head and/or feet, but an excessive amount of white is undesirable.

Height - Percherons range in height from 15 to 19 hands high, but the average Percheron stands between 16.2 and 17.3 hands high.

Origin:  The Clydesdale was developed by the farmers in a district in Scotland called Lanarkshire. Although the breed was developed primarily to suit the needs of the Lanarkshire farmers, it also widely used for heavy haulage in the streets of Glasgow. The Clydesdale Association was formed in 1877, and proved to be a major driving source for the breed.

Character - Clydesdales are quite active horses. They are gentle for their large size and enjoy interacting with people. They certainly earn their nickname of “The Gentle Giants”.

Physical Characteristics:
Colour - The most common color of Clydesdales is bay. Browns, black, chestnut, and roan also occur in some instances. The preferred markings are four white socks, extending to the knee or hock, along with a well defined blaze on the face.

Height- Clydesdales stand between 16.2 hands and 18 hands high, but can be over 19 hands high in some cases.

Origin:  The Suffolk Punch was developed in eastern England, during the medieval times. The homeland of the Suffolk horses was Norfolk and Suffolk counties. With the mechanization, which followed the Second World War, the Suffolk breed took a drastic cut in numbers. Although the 1950’s were tough on the draft horse industry, it rebounded during the 1960’s, and the 1970’s, importations from England were on an upswing.

Character - The Suffolk breed of horse has a splendid disposition, and easy temperament. They are a willing worker and have superb endurance.

Physical Characteristics:
Colour - Their color is chestnut, ranging from light golden to dark liver.
White markings occur in the breed, however it is usually limited to the face and feet.

Height - The average height of a Suffolk horse is 16.1 hands, but many stallions stand 17 hands or more.